Been quiet lately. Been pretty busy though.

Kids are old enough to take some real hikes now so we have gone on 2 or 3 each month throughout the summer. It is great to be able to show them how wonderful the world really is when you get away from all the people and houses.

Thought I would share some of the scenes from the recent hikes: 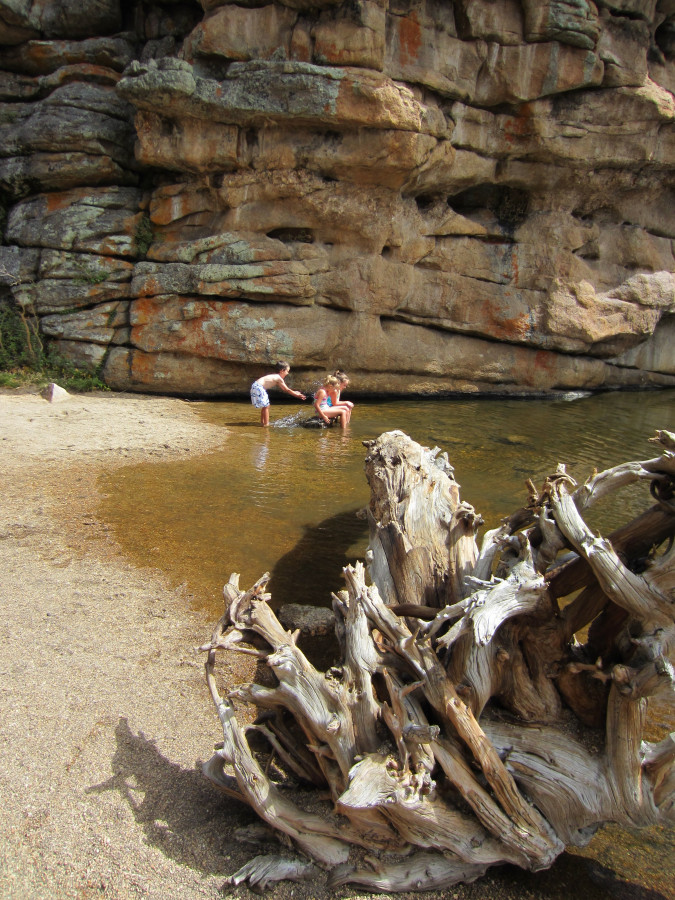 I know that I have been quiet...... I wish my life was as quiet as I have been.  I am now officially a Colorado resident.  Two months ago I was firmly planted in my home state of Washington, amongst my dark brooding woods, but due to some issues with my love's family we have moved with the 3 wee bairns to Northern CO.  My work was wonderful in relocating me at my request while allowing me to keep my position and pay......... and the weather has been great (70 degrees and sunny in NOVEMBER).  I do miss my trees though.  What I have seen so far is nice, it's own beauty - but I will miss my deep, dark, green and lush wilderness that I was so often able to escape to. The good news is that our dollar stretches a lot further here - great house for less money, less expensive utilities, food, tax, etc.   The bad news?  I had just found someone in Washington that would be a GREAT resource in Celtic Reconstructionism and I was unable to make a single meeting.  Hopefully there will be some like-minded individuals here to spend some time with.  Colorado is very conservative by comparison......... I hope I will be successful.

Took an afternoon while camping with the family to have some "me" time and take a nice hike through the National Forest a few miles away.  Washington is difficult in that a lot of terrain is not passable without a trail so you don't feel like you are doing a rough hike, but the trails are so beautiful you really don't mind.  The 3 hours I hiked I didn't see a single person, which allowed me to really detach from society and further find the connection with the woods that had started a couple days earlier while camping.  It is funny - I am blessed to have a home with a greenbelt directly behind me with a fantastic glen, a spawning creek and a wildlife reserve immediately beyond the greenbelt.  I am able to sit at the creek, 25 feet below my yard, and feel completely isolated but the connection you get when you are miles from another person, much less any roads, buildings or industry is totally different isn't it?

I was sad to have to end the hike - but happy to get back to the kids.  Every day in the woods with them was a treasure, similar to family holidays - kids help remind us how much fun things in life really are.

Here are some photos from the hike (my daughter, 5 yo, made me PROMISE to take pictures) Then, when I was done taking the obligatory photos as mentioned above I found a nice small, slightly overgrown trail to take deeper into the wood, sat on a fallen log, closed my eyes and listened to the forest for about 30 minutes.  I guess some people would call it meditation but to me it is simply opening myself up to the world our pre-civilized ancestors were born into and found a way to live within.

Happy to say that I am just back from taking my children on their first camping trip.  Kell and I had a fantastic time (we've missed camping terribly since having 3 kids in 34 months sort of forced a 5 year lapse in camping).  My kids did great - 4 nights mid-week in which we had the camp ground entirely to ourselves the first 3 nights.  I actually HATE campgrounds.  Would much prefer to be in the deep woods away from designated camp sites and facilties,  but considering the kids........  We did pick a rather "wild" campground with very isolated sites and being there mid-week worked out great.  Helping my kids learn how to tend a proper camp, going on hikes (or "explores" if you ask them), playing in the creek and teaching them more about how to live WITHIN nature was great.  My daughter desided that the name of the faery that puts moss on all the trees is "Bouey", who is apparently a very nice little boy faery that stays very busy.  :-)

Here are some shots from the week - I am leaving out the ones of my 3 kids playing in the creek naked, even though they are pretty damn funny. My intent here was to create something that ties both sides of my family history and heritage together.

I wanted the final piece to have a decidedly Celtic feel to it – my grandparents names (and maiden names) are; Kirkpatrick a Scotch-Irish name, Haskell a Welsh name, Kidder which is Irish and Fitzherbert, also Irish.  Obviously all four sides come from the heart of the Celtic Nations.

Both my parents sides of my family (the Kirkpatrick side and the Haskell side) have a Coat of Arms/ Family Crest with a lot of history tied to these images.  Each crest has a very specific image associated with it – The Haskell crest has the apple tree and the Kirkpatrick crest has a hand clutching a dagger.  To help understand the reasoning behind this I am including a quick history lesson.

“Robert Bruce while William Wallace was fighting his campaigns was planning his next move in the throne struggle as was the other contender Red Comyn. No-one could do anything with Wallace still around, the people loved him; they saw in him the rights of common men being acknowledged. However with him now gone the race was back on. Bruce and Comyn could not agree on who would rule. Bruce being the strongest claimant with most following, he had the power to unite all the nobles it was decided he would rule, while Comyn would receive more lands. A pact was drawn and they would confront the English to assert his kingship. Comyn apparently alerted the English and sold Bruce out. This resulted in his army being routed by the English in an ambush, while he was waiting for Comyn's army to turn up. Bruce had to go into hiding, his family being slaughtered as were a lot of Scots, a price was on his head. Bruce had an ally in Roger Kirkpatrick of Closeburn, Roger was Duncan Kirkpatrick of Torthorwald's elder brother (Duncan Kirkpatrick was William Wallace’s cousin through marriage). Roger took Bruce to places of refuge in his extensive lands; meanwhile Comyn began planning his coronation. He could not unite the nobles, without Bruce no-one trusted him so a meeting was arranged between him and Bruce. A neutral place was chosen, Greyfriars kirk (Dumfrieshire). Roger Kirkpatrick and a few others formed Bruce's entourage. Most were in black mood because of Comyn's treachery. During the meeting Bruce, in a rage, stabbed Comyn. He fled the church and on meeting him outside Roger Kirkpatrick asked "whose blood sire?" Bruce’s’ reply was "I doubt I have slain the Comyn!”. On this Kirkpatrick entered the church and finished the not quite dead Comyn off. When he re-emerged from the church he is reputed to have said (while holding aloft his blood soaked dagger) "MAC SICCAR" Which means I MAKE SURE. This is where the dagger within the Kirkpatrick family crest and the family motto appear from. Bruce was now the undisputed king of Scot's. He succeeded in once and for all crushing English domination in Scotland at Bannockburn 1314.”

“That the family is one anciently distinguished is evidenced by the fact that it is an armigerous family and that legend traces the origin of the crest to a definite incident which is said to have occurred at the battle of Hastings. The legend is this: at the battle of Hastings, William the Conqueror, being faint from the lack of food, saw in the distance, near the lines of Harold, an apple tree in fruit. Expressing the belief that some of the apples would revive him until the fortunes of the day should be decided, one of his attendant knights, Roger de Haskell by name, dashed forward amid a shower of the enemy's arrows and brought to his sovereign a scarf filled with the fruit, whereupon the Conqueror bade him bear as his crest a fruit-bearing apple tree pierced by a flying arrow. The arrow seems to have disappeared, but the apple-tree remains as a reminder to posterity of the courage of an early progenitor”

Here are the Coat of Arms / Family Crests from each family.

I also wanted to include a small portion of the Kidder and Fitzherbert crests as well, my grandmothers maiden names – specifically a way to place the crescents within the design.

Almost a year later and after a ton of revisions, a ton of research and driving a family member – who I am lucky enough to have because he is a phenomenal artist (this was WAY beneath him, but he was very kind to help me anyway) I finally have a completed crest.  When I started this as a doodle on a pad of paper during a 2 day conference I was sitting in for work I wanted something that was the culmination of me…… I had no idea how good the final product would be.

My deepest thanks to James for his patience (with me) and hard work. Yesterday topped out at 66 degrees...... nice and cool after a bit of a heat wave over the past month.  It had hit 104 degrees at my house in recent weeks (record all time highs in Washington) and we are simply not equiped to deal with that heat - not many ACs in Seattle.

I did find a great way to cool off though - I have a heavily wooded glen behind my house with a nice stream running through it.  It sits about 30 feet below my yard and the combination of the trees, shade, water and low elevation made it a good 10-12 degrees cooler.  Sitting on the bank without a shirt while cooling my feet i the stream was the best feeling I have had in a while.

As good as the cool day felt yesterday I am actually hoping for one more hot stretch so I can do that again - maybe not 104 though......

Here is the glen I am talking about:

Laid out on the grass tonight as dusk settled in to watch a thunder storm pass overhead.  It was a warm day today (for Washington) and laying in the grass in just my shorts and shirt feeling the cold rain hit me with the residual heat coming from the grass was unbelievably refreshing.  To close your eyes and hear the rolling thunder echo past the sound of the rain on the trees, smell the electricity in the air and feel the rain on your face.